Why do men have a higher percentage of muscles and women in fat? Why is it harder for women to reduce body fat? And why is it so hard for me as a woman to do pull ups?
Seana8 years ago6 min read

Many sports strongly believe in male and female disciplines, or they classify records based on gender. However, Freeletics is equally suitable for both men and women. Nevertheless, many female Free Athletes find it hard at the start to do pull ups, handstand push ups or other exercises that require a certain amount of strength. But skills don’t have anything to do with gender! If you’re aware of the differences in body composition, metabolism and resulting performance between men and women, then you can use this information to your advantage! In the following we will therefore introduce you to a few of these biologically-determined gender differences, so that you can train more efficiently! After all, whether male or female: We are all Free Athletes!

Given that women finish growing a little earlier than men in the most important growth stage in life, which is puberty, due to rising oestrogen levels, they are on average 10 to 15 inches shorter and 20 to 25 kilograms lighter. This lower body weight is not just due to a lower body mass as a whole, and a lower percentage of muscles, but it’s also partly due to a bone structure that is approximately 25% lighter, given that skeletal maturity in women also starts earlier due to rising oestrogen levels, and due to the fact that women’s bone mass and bone density are also less than men.

These factors do not make a difference to training. It rather depends on the proportions of the various body parts to each other: Men have arms and legs that are about 10% longer and they have wider shoulders, whereas women’s torsos are proportionally about 3% larger (In relation to their body mass) than men’s torsos. Together with a wider pelvis, the difference in size between the pelvis and shoulders is less pronounced in women and it also means a slightly deeper centre of gravity. In addition, due to the width of the pelvis in women, they have a more acute leg angle, which is also called a physiological X-leg position.

Pelvis shape, leg angle, and respective centre of gravity are very important in terms of biomechanics and motor skills, meaning that male Free Athletes have an easier time doing exercises, such as jumps and sprints.

Muscles - hormones are to blame!

Women have a lower genetic muscle percentage in their total body mass than men. The “male” hormone testosterone is directly related to muscle building, and increases significantly for men during puberty. On average, the proportion of muscle male body weight is about 40%, and about 35% for females.

Muscles do not differ by gender in terms of structure and functioning. There aren’t any gender-related differences either in terms of distribution of muscle fiber types, or preferences of energy sources or acquisition (aerobic or anaerobic).

However, due to higher testosterone levels and better muscle metabolism, men tend to have a higher trainability of their dynamic working muscles and white muscle fibres  than women, which results in greater muscle volume and faster growth. Muscles that are designed for static or stabilising tasks do not make any differences in both genders in terms of volume and growth rate. The fear that many women have that Freeletics will make them too muscular or unfeminine in appearance is unfounded, as they have lower muscle percentage and lower growth potential.

Body fat - where are its favourite spots?

The higher percentage of body fat in women is both genetically and thus metabolically determined. It tends to be 28% on average. Whereas, for men the average is 18%. Also, the distribution of body fat differs enormously in both sexes: Women store fat primarily just under the skin, especially in the area around the hips and thighs, whereas men store it on their abdomen in particular. Due to men’s generally lower body fat, they find it easier than women to get a sixpack.

Strength - you are only strong if you can defeat yourself!

Whereas the amount of strength that can be generated by the same amount of muscle mass is approximately the same for both sexes, there is also a difference in terms of absolute power due to from the differences in the overall proportion of muscle. Women can harness up to 80% of the strength that men can create related to body weight. 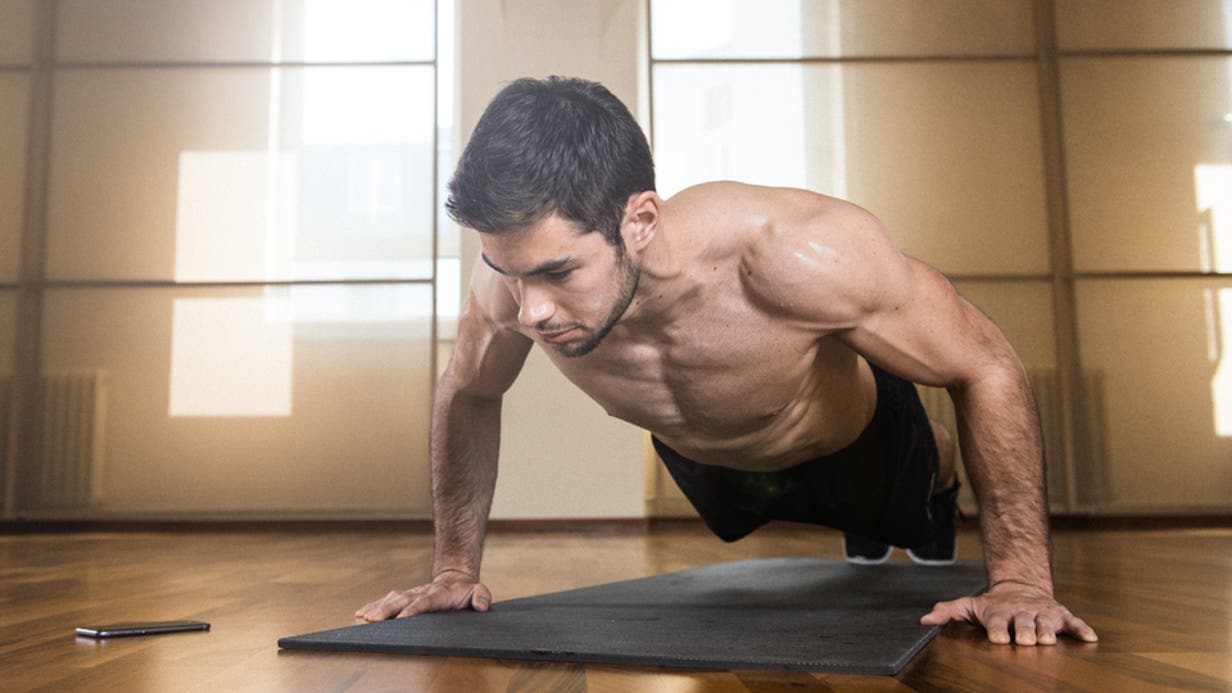 Stretching and mobility - points for women!

Female muscles can stretch easier than men due to the lower muscle tissue density (due to higher oestrogen and lower testosterone levels). A clear advantage for women! Regularly and extensively stretched muscles are not only a factor for added mobility but they also enhance regenerative capacity and create a more efficient muscle metabolism.

But also joints, tendons and ligaments tend to be more flexible for women as they have less muscle mass as obstacels, so to say. When it comes to exercises that require a high degree of agility such as climbers or stand ups, women have a clear advantage. It’s even easier for women to learn the techniques for exercises such as pikes or handstand push ups as they require a large torso-to-arm angle.

True strength is located in the heart!

A special muscle in our body is the heart. The female heart is slightly smaller and lighter than the male – both in terms of mass and volume. Women compensate for the lower amount of volume distributed by each heartbeat with a higher heart rate. It beats a little faster than men’s hearts. Neither men nor women have an advantage in terms of the ability to train the heart muscle in terms of strength and endurance. Athletes are the only ones at an advantage in this regard.

Oxygen uptake - who gets tired faster?

Female lungs and the associated respiratory tract (nose, trachea, bronchi) are a little smaller and have a smaller volume than men’s lungs. Also, women tend to breathe using their chest, whereas men tend to abdominal breathing.

Women also have about ⅕ less haemoglobin than men. Haemoglobin binds oxygen in the blood and transports it to cells. Add to that a less pronounced female capillary system and a lower number of mitochondria in the cells themselves. The mitochondria, which are often described as cell powerhouses, are particularly important when it comes to athletic performance, since they are also responsible for supply energy by the aid of oxygen.

Recent developments also show that women, can make up ground in terms of long endurance exercising – even in very extreme. One reason for this is the slightly more efficient fat metabolism in women, which plays a special role in long-distance running. 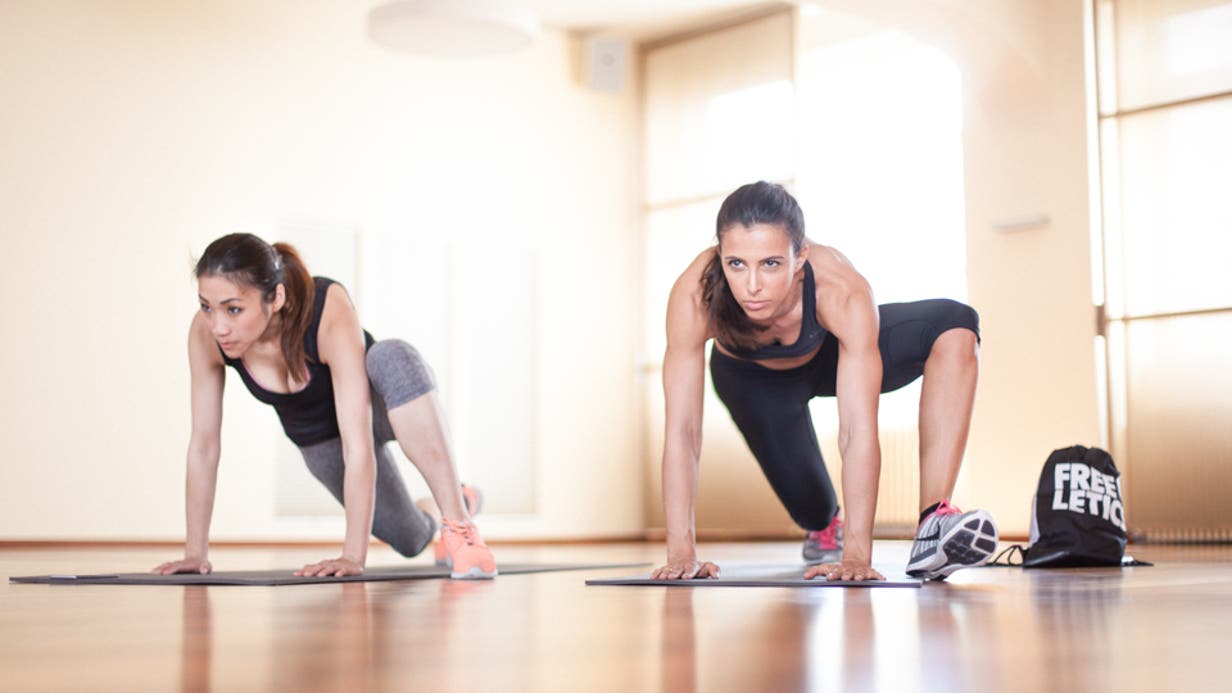 Biology is no excuse!

At first glance, it looks as if the men hold the advantage in terms of athletic performance. However, Freeletics aims to unleash all four athletic abilities: Strength, endurance, mobility and speed. Both genders have their strengths and weaknesses in the respective disciplines. Not to mention that genetics still plays a minor role in relation to fitness and performance. Whoever eats in a healthy way and leads an active lifestyles, will still beat anyone who does not train – regardless if they are male or female!