How to perform the perfect stroke

It’s one movement repeated over and over again. Get it wrong and you’re in trouble.
Mathieu5 years ago5 min read

Everyone goes running, but how often do you sweat it out on a rowing machine? It’s the ideal endurance exercise - low resistance, high repetition, low impact, high return - yet not many dare to give it a try. If you want to become a better all-round athlete, here’s a few reasons why rowing will improve your abilities and our top tips on performing the perfect stroke.

The benefits of rowing

Rowing is great because it’s a full body exercise, meaning all muscles are used to perform the movement. At the same time, it’s a low impact and resistance exercise, meaning as long as your technique is correct, the strain put on your body is not great enough to cause injury to your joints or muscles. Sessions on the rowing machine are a great way to improve your overall endurance as it increases your aerobic capacity and enhances your anaerobic performance. Many people are put off because they think it’s boring, but the good thing is that it doesn’t need to be. Of course you can simply row for as long as possible, but you can also do high intensity interval rowing workouts. For example, 5 x 500 meters all out with a 90 second rest in-between. Take our word for it, this is anything but boring! Technically, rowing is far from being the most complicated exercise but it’s only this effective if you do it right.

The 4 stages of the rowing stroke

The overall movement is called a rowing stroke. Every stroke is composed of two phases: the Drive and the Recovery; and two positions: the Catch and the Finish. To perform a good stroke, an athlete starts at the Catch, performs the Drive until the Finish position then goes through the Recovery phase and back to the Catch position.

Feet remain pushed against the footboard with the foot straps placed at the base of the toes. Hands are relaxed on the handle bar and positioned shoulder width apart. 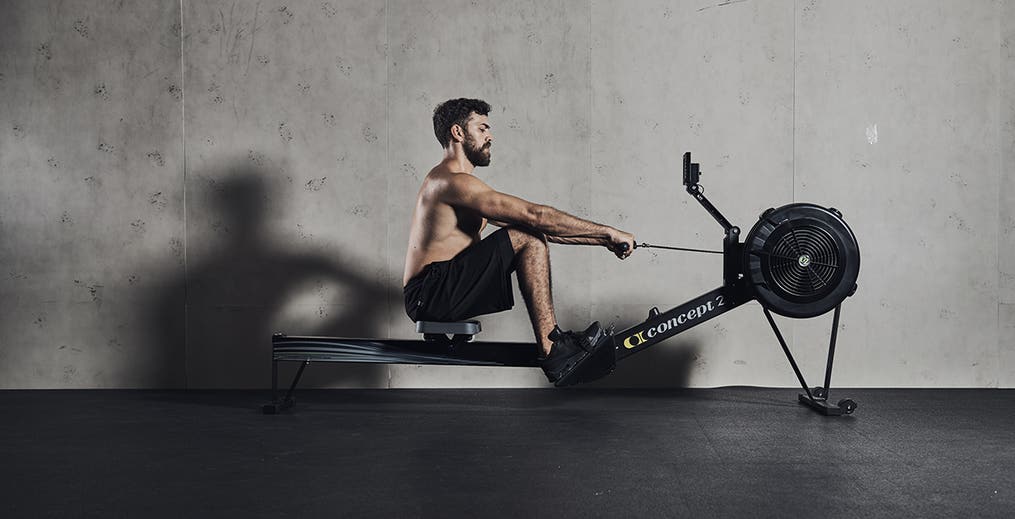 The Catch is the starting position, where the athlete is slightly bent forwards at around 85°. The arms and back are straight, and the knees are bent. 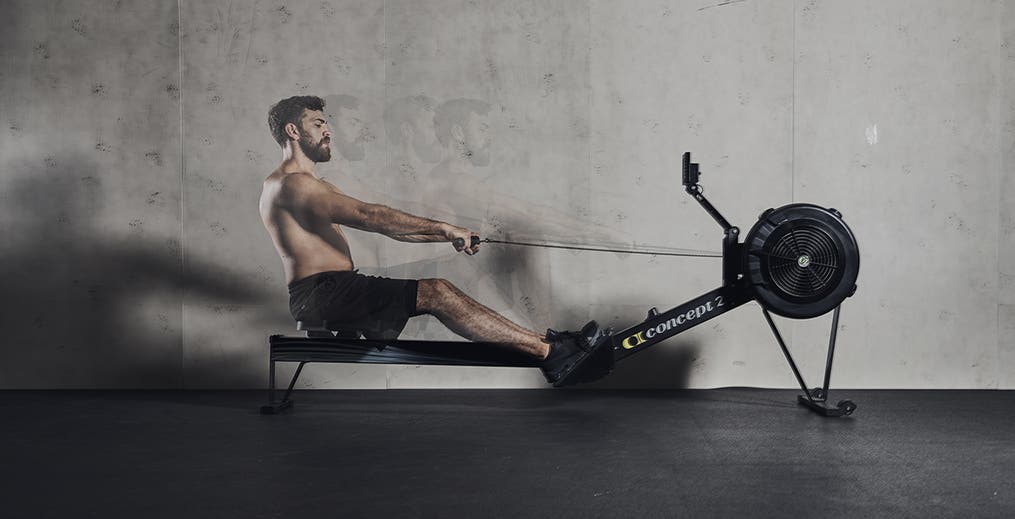 For the Driving phase, the athlete starts by pushing against the footboard until their legs are straight. Keeping their back straight and engaging their core, they then lean back and pull their arms towards their chest. 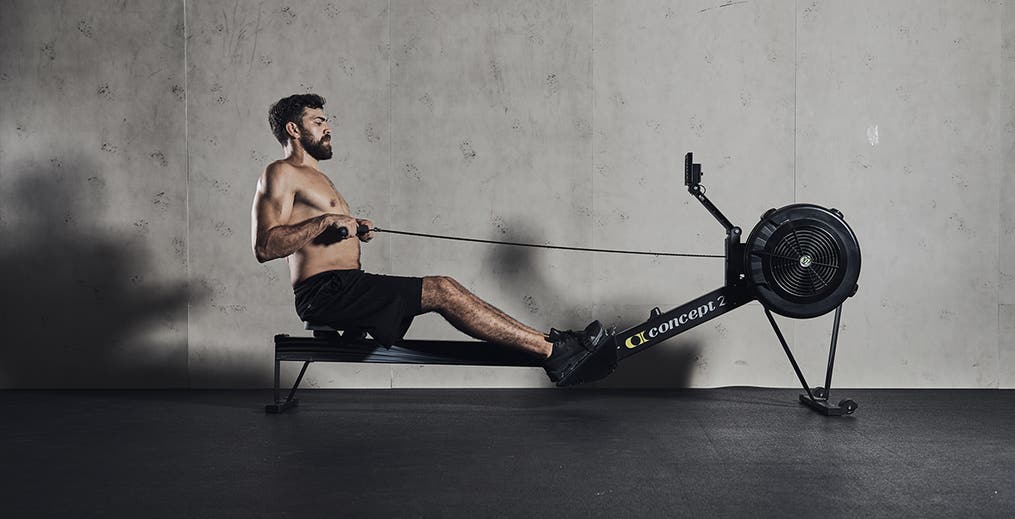 At the Finish position, the legs are straight, the chest and core are slightly pushed forwards, the elbows are bent and positioned behind the back and the handle bar is at the same level as the breastbone. The back is straight, and the shoulder blades are pulled back together.

During the Recovery phase, the athlete goes through the exact same movement as the Drive but in reverse. The arms are stretched straight out infront, the body slightly bent forwards and the legs are bent until the Catch position.

It takes a while to get used to but after some practice, the overall movement becomes a lot more fluid. Notice that all your main joints are used. During the Drive, the joints in the lower body are used first: the hips are loaded, followed by the knees and ankles. Afterwards, the joints in the upper body come into action: shoulders are loaded, the shoulder blades are pulled back together, the elbows are bent and at the end the wrists are loaded to finish the movement by pulling on the handle bar.

Every stroke puts a strain on your entire body, muscles and joints included. However, the low impact of the exercise, in comparison with striking the ground with your feet for instance, is a great way to improve your overall physical condition with less risk of injury.

Mistakes and tips to avoid them

Doing 3K on a rowing machine is approximately 500 rowing strokes. That means repeating the same movement 500 times. All it takes is for you to do that one movement wrong and imagine the damage this can do to your body. That’s why it’s important to learn the movement and consciously perform each stroke correctly in the beginning before even attempting to increase your speed.

The most common mistake happens already at the Catch position, where people tend to round their back, and lean forwards which puts a lot of strain on the spine. The best way to ensure your spine is straight is to look at the chain. By keeping your gaze at this level, the position of your head will force your spine to stay in a neutral position.

Remember that your whole foot should remain on the footboard for the entire movement. Even at the Catch position, the heels should be planted. While you are performing the Drive, keep in mind that you want to use your large muscle groups first. Too often, people tend to use their core and arms before fully straightening out their legs. The best way to train this is to row with the feet out of the foot straps. This will force you to control your movement.

At the Finish, many tend to lean too far back. This not only results in using extra energy for no reason but can also harm your lower back. Keep in mind not lean back more than 100°.

It’s not unusual to see people put a damper setting of 10 which is the highest resistance of the fan. This makes every stroke very heavy. People tend to think that the harder the resistance, the stronger they get. But in reality, rowing with a high resistance doesn’t necessarily boost your training results. Keep in mind that you are doing the same movement, repetitively, for a long time, so high resistance can easily lead to bad technique. This overconfidence can also quickly bring you to an overall exhaustion, meaning you miss out on the desired results and, instead, climb off the rower with an injury. The advised damper setting is 3-5, which is the closest to the resistance of actual water. Remember, rowing is a full body movement, it is not just about pulling your hardest. 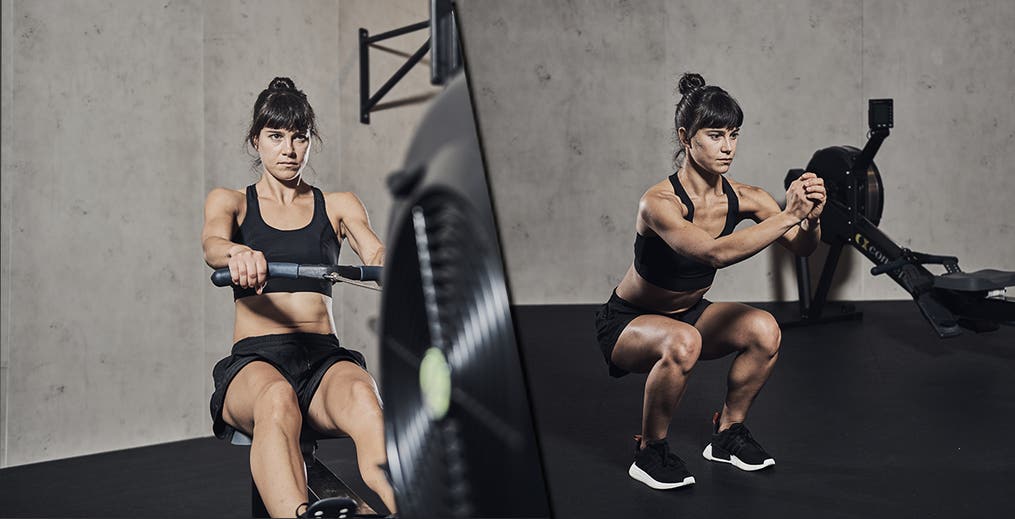 All in all, rowing is a good way to improve your cardio and more precisely your aerobic and anaerobic capacities. You want to know what’s so great about this? It makes burpees easier, as well as other Freeletics exercises such as jumping jacks or split lunges.

The hip movement of the rowing stroke improves the strength and smooth movement of your hips, which makes it easier to perform squats, stand ups and hips raises. Don’t forget that your hips are the main joint of your body, so healthy hips are essential for safe movement and training.

The Drive phase - in other words the pulling phase - of a rowing stroke is the exact same movement as incline rows. Every stroke, therefore, gives you the perfect opportunity to rehearse this movement with less resistance. In addition to strengthening your back, rowing is a great way to improve your incline row technique.

Rowing also requires a strong grip. Very little trains your forearms and hands better than 100 strokes on your rowing machine. Your pullups, passive hanging and leg raises will all benefit from regular rowing.

Now you know how, it’s time to let loose. Grab the handlebar and get to work.