Freeletics turned Ellie from a sedentary, shy, lazy, self-doubting person who hated sports and being outside their comfort zone into someone who was focused, motivated, confident and outgoing. Read her story here.
Seana6 years ago4 min read

When I first started with Freeletics in August 2014, it was the first time I had done any kind of sports. I had been skinny all my life and never saw the need to exercise. Then, after a herniated disk in my spine, I found there was a need after all. That’s when I found Freeletics.

Even though I gave up during my first workout – Aphrodite – I persisted, albeit slowly. I wanted to finally stick to something. So I kept going. And not only did I fall in love with training, Freeletics turned me from a sedentary, shy, lazy, self-doubting person who hated sports and being outside their comfort zone into someone who was focused, motivated, confident, outgoing and always up for a challenge. Finally, I was someone who I could be proud of. It was so much more than being fit and toned – it was finally being the kind of person I wanted to be. The best person I could be.

Freeletics truly changed my life for the better, that’s beyond doubt, and I’m so happy I didn’t give up after that first Aphrodite. I believed in what Freeletics stood for – so much so, that I then left my job to work there. At the time, I was working on one of the new apps shortly before it launched. It was a crazy time and I loved every minute, but the new stress, along with bad eating habits which crept up on me took their toll. Very long days at the office meant that I used any free hours I had to keep up a social life, so I fell further behind with my training. On top of that I had a knee injury which I used as an excuse not to train instead of just getting it treated. 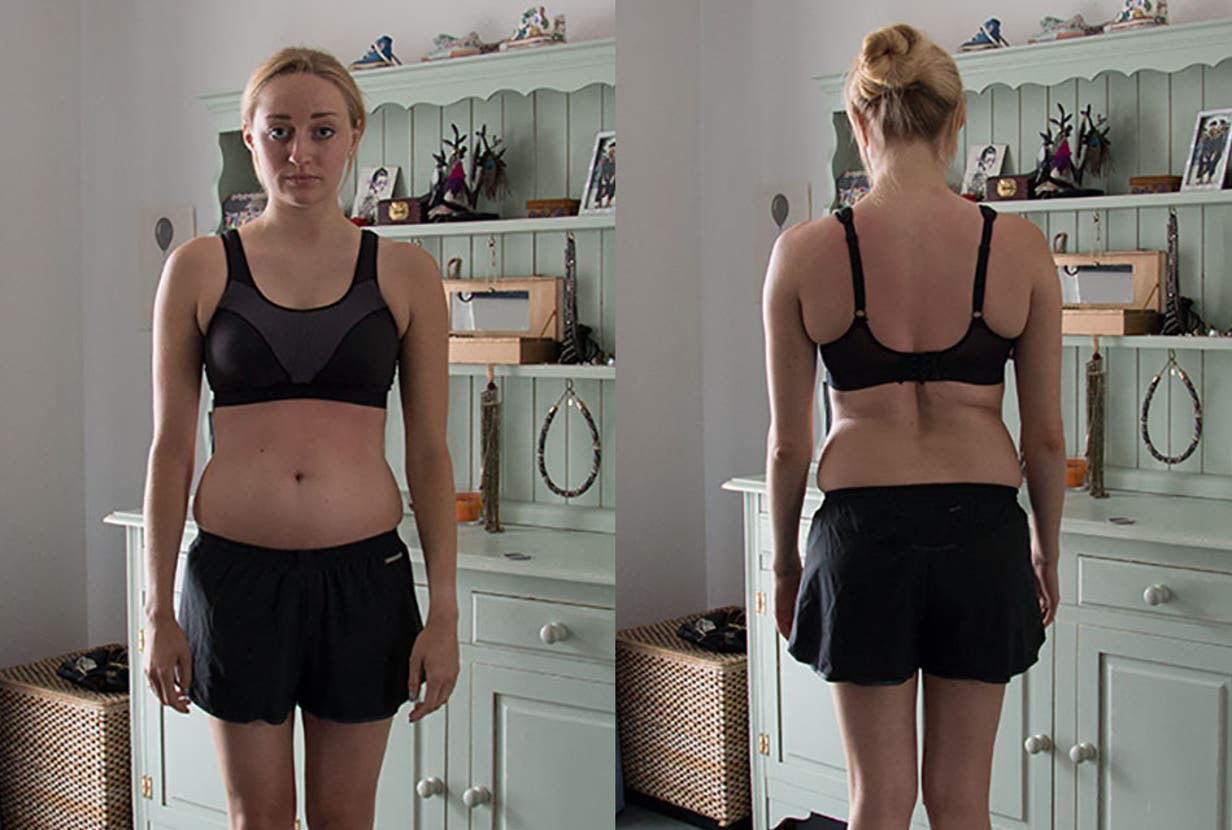 One day I realised I hadn’t trained regularly for over four months. I had totally lost my routine and my motivation while other priorities took a front seat. It was so frustrating. I felt like all the hard work of the last year had been for absolutely nothing. I was uncomfortable in my own body – something I thought I wouldn’t have to feel again. I had no energy and my motivation had left me. My excuses were plentiful and every day I would say “tomorrow I’ll start again.” It was heartbreaking to look at myself in the mirror, knowing this wasn’t who I was or had been. I always chose loose clothing and hoped people wouldn’t notice. My figure was the typical “skinny fat” type – relatively easy to hide, but it felt horrible, especially knowing how fit I had been. I was unhappy with myself, but I was scared of accepting that I would have to start all over again. I knew I had to make a change. I wasn’t my best self, and if I didn’t do something now, I didn’t know when I ever would. 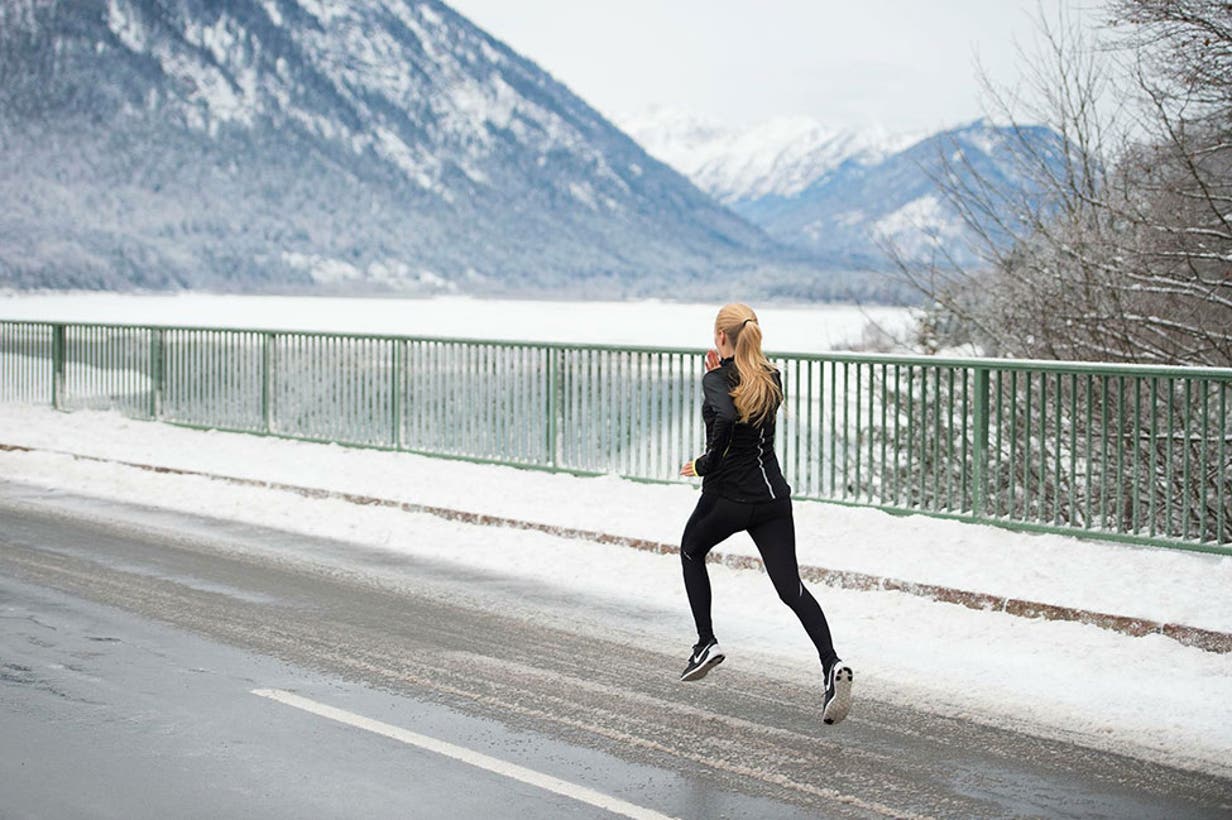 As I felt and looked like I was starting over, I decided to begin with the Running app. I couldn’t face being terrible at the Bodyweight workouts I used to be so good at. I was never a runner, and I really didn’t like running, so I decided to take on this extra challenge. I trained for four weeks with the Running app and used the Nutrition app for every meal, every day. And it was such a positive experience. While I struggled with the 15-minute warm-up run, I really enjoyed the interval workouts. And I was getting much faster. Soon, I could run a Maat (2k) over three minutes faster than before. Intervals were so much better suited to me than just trying to run as far or as long as possible. 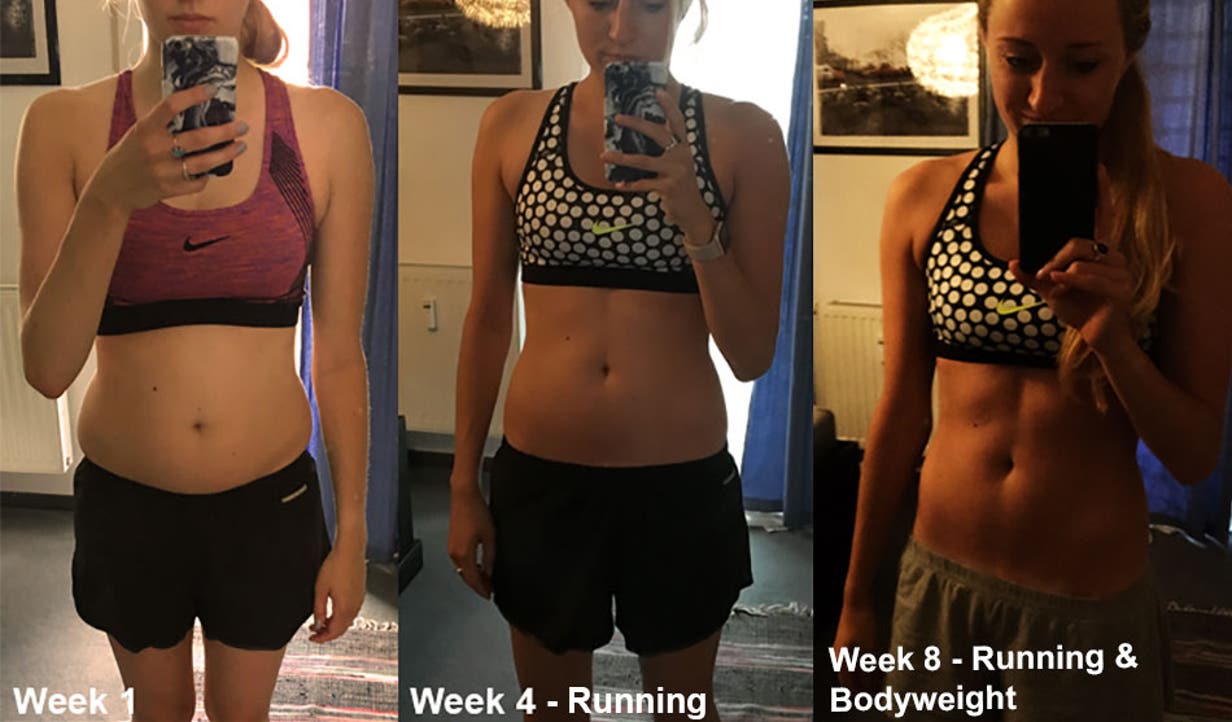 This proved to me that I was capable of more than I thought. And yet I didn’t feel like I was seeing much difference in the mirror. But I knew this would take time. So I was patient and I just kept going. After four weeks I took a progress picture and compared it to the beginning. The difference was so surprising and motivated me to go harder and set my goals higher. It was time to get back to Bodyweight. I split my training 60/40 between Running and Bodyweight, then 50/50 later on. Both training systems complemented each other really well for me and I was feeling so much fitter than I had in months and was more confident every day, even training with the local community. It was tough, but I was definitely enjoying it. 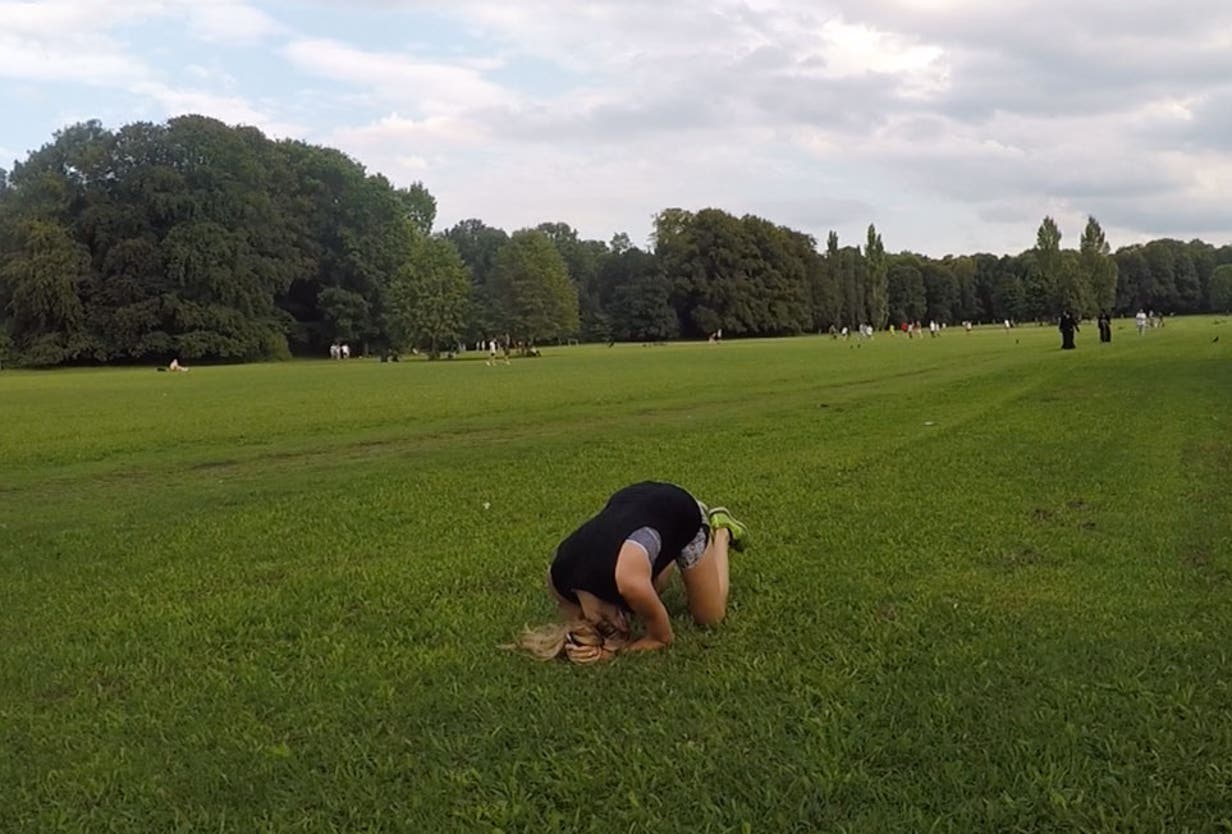 I have to say that Nutrition was possibly the hardest part. No processed foods, no sugar, no alcohol, no pre-packaged meals. It was a mind game, but one I knew I wanted to win because it fueled my progress. After a few weeks, I got the hang of it and wasn’t even thinking about it that much. I learned so much about clean eating and clever ways of combining healthy foods. I now understand why they say reaching your fitness goals is 70% good nutrition. I definitely wouldn’t have seen results so quickly without it.

I was never a runner before, so I can’t believe how far I’ve come. From struggling after 1k to running my first 10k in 53 mins. From forcing myself to run to loving it. I’m so happy I didn’t wait any longer to get back to the best version of myself. And that’s exactly what I would call it, because this time around, I came even further than last time and took on more challenges. In less than 14 weeks I lost 6% body fat, 4cm from my waist and went down a size. But more importantly, I felt like myself again. But better. Confident, strong, comfortable, happy. Ready to start setting new goals and to see how far I can go this time around. I still use the apps and can’t see myself stopping anytime soon. 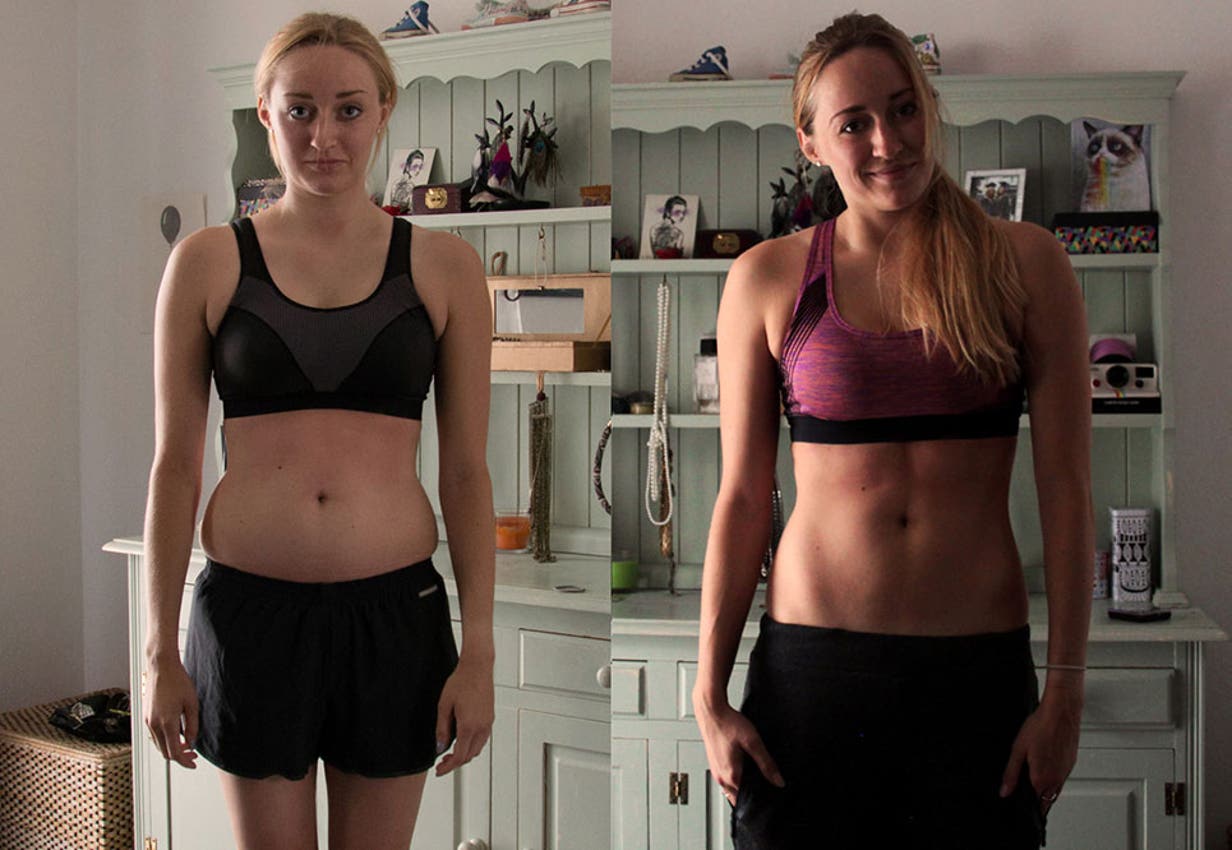 My advice to anyone wanting to make a change would be that it won’t just happen. You have to get up and make it happen. It’s in your hands, and your time is too precious to waste it wishing your life would be different. You have the potential, so use it. Don’t be scared, you can only fail if you don’t try. Start, be patient, stay committed and keep going, no matter what. You will get there in the end. And if you’re not there yet, it isn’t the end.