What is the effect of weight loss on the body? Learn more about calorie needs, basal metabolic and energy consumption rates, and how you can best lose weight.
Seana7 years ago4 min read

The term ”weight loss” brings a number of concepts to mind – counting calories, low-fat foods, and crash dieting. But what does “losing weight” really mean and what happens to the body during this process? Energy balance is very important. Learn what’s behind it and the role it plays in weight loss.

It’s well known that foods contain calories. It’s less known, however, that calories are important energy suppliers. The human body burns the food we consume and can therefore use it as energy to sustain itself. It needs this energy for a variety of movements and in particular for maintaining important basic body functions. These include all metabolic activities and the maintaining of a constant body temperature. Energy is generally specified in kilocalories (kcal) and kilojoules (kJ).

Energy balance – the basis for any physical changes

Energy balance is the difference between energy intake and energy requirements, thus the difference between the energy absorbed and actual energy required. The supply of energy is equivalent to the food intake and can therefore be determined relatively easily by counting kilocalories. In contrast, the daily energy requirements, also known as the metabolic rate, is comprised of more complex parts: the basal metabolic rate and the energy conversion rate. Another, less well-known component of the energy demand is thermogenesis.

The basal metabolic rate is the amount of energy required by the human body – in a state of complete rest and with an empty stomach – to maintain its functions, in particular its basic metabolism and body temperature.

The basal metabolic rate of a person is determined by factors such as gender, age, size, weight, the proportion of the body’s muscle mass, the body surface area, and certain hormonal factors.

Thermogenesis is the third factor that affects your caloric consumption. During certain metabolic processes, excess energy is converted into heat and thus directly burned. The degree of this energy combustion differs from person to person on an individual basis. Part of thermogenesis is also food-induced: For example, already during metabolization, 30-40% of energy from proteins is released into the environment in the form of heat.

When do I lose and gain weight? 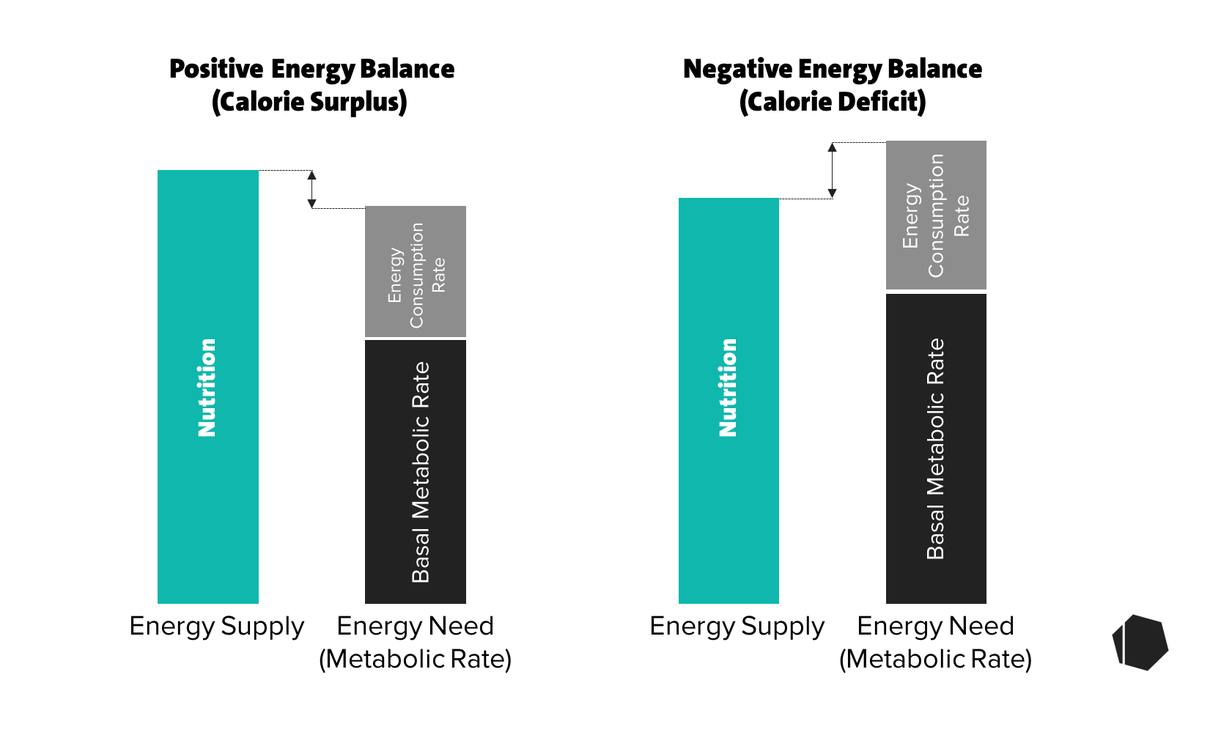 How do I attain a negative calorie balance?

Basically, there are three factors that you can influence to attain a negative calorie balance and, as a result, lose weight: The first of these is to lower the energy supply by reducing the daily caloric intake. Drastic diets, however, should be handled with care, because over time, the body will adapt to an energy deficiency and respond by reducing the basal metabolic rate and moving into a kind of energy saving mode. Instead of radical dieting, we therefore recommend a healthy diet in the long term, a diet that provides your body with exactly the nutrients it needs.

In addition to reducing the energy supply, you may also increase your consumption of energy, that is, increase your energy conversion rate. This you can do by adopting a more active lifestyle – by moving more at work, in school, or at home – or, naturally, by doing sports. Training with Freeletics Bodyweight, Freeletics Running, or the combination of the two, is ideally suited for this. An additional benefit of frequent workouts is the after burn effect. It makes your body burn an increased amount of energy not only during exertion, but also for several hours thereafter.

Regular training will also affect your caloric consumption in the long term: As mentioned previously, the proportion of the body’s own muscle mass influences the basal metabolic rate significantly. In short: With an increasing muscle mass, your body also burns more calories – even in a state of rest. Be it targeted weight training in the gym, exercises using your own body weight only, or even running,  doing sports regularly will increase the proportion of your body’s muscle mass and therefore its energy needs.

Important: More muscles also imply more weight. If despite your workouts, your scale indicates the same or even increased weight, you may still have lost some body fat.

To lose weight successfully and long-term, we recommend that you combine a reduced caloric intake with sports. Weight loss does not depend on the meticulous counting of supplied and consumed calories, but rather on a conscious and purposeful lifestyle that considers the findings described here on a daily basis.