How footballers avoid injuries with Freeletics

Follow our tips and put a stop to nasty hamstring strains and ankle injuries.
Ely4 years ago4 min read

Doing well-rounded bodyweight workouts builds muscle mass, gains full body mobility, burns excess fat, strengthens joints and improves balance and stability. We challenge you to name a sport where these benefits wouldn't improve your performance. Here, we dissect the common injuries most footballers suffer from and uncover the Freeletics exercises that prevent them.

A dominant side creates a weak side

Football players are often known for having one leg which they are more talented with than the other - we call it the dominant leg. This happens because when players start playing football, one leg usually feels more natural to kick and handle the ball with and therefore it’s used more often in practice and in games, resulting in one leg being stronger than the other. Over time, this can create an imbalance and as a result of this, the body uses the dominant leg even more. You’re probably wondering what’s wrong with a super strong leg? It’s the other leg that becomes the problem. This imbalance creates an unstable side of the body that is much more at risk of suffering an injury. To prevent this, football players should train both legs individually, rather than just focusing on exercises for both legs, such as squats. This is because your body will, again, naturally favor the dominant side. 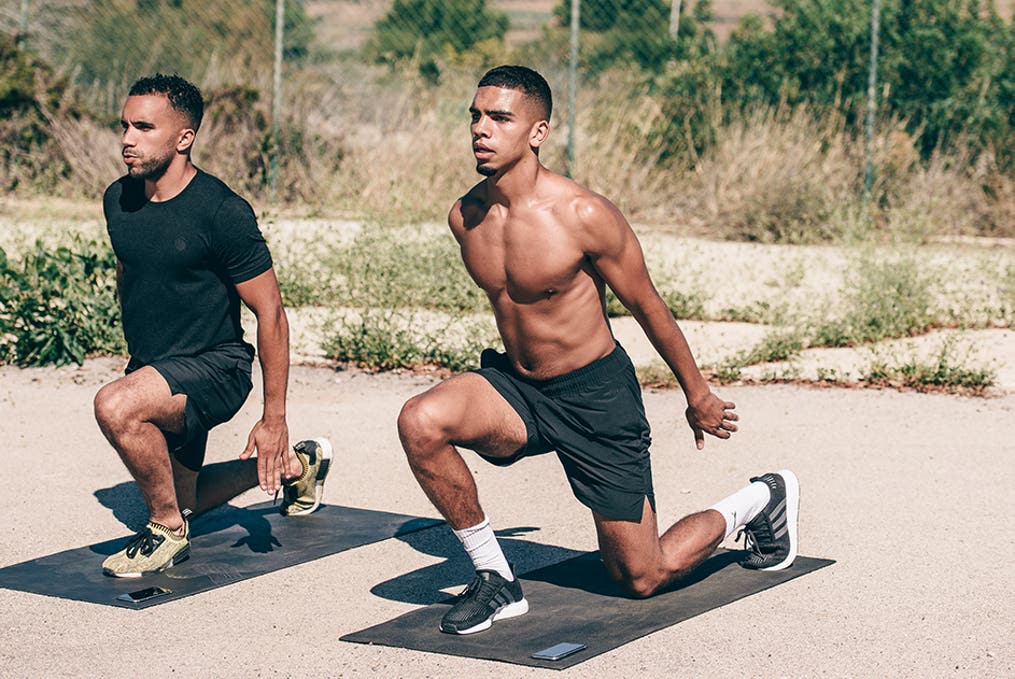 Tackle the problem with single-leg Freeletics exercises such as cossack squats, pistol squats, elevated split squats, lunges, single leg hip raises and shoulder bridge leg raises. When performing these exercises it’s extremely important that you focus on good form on both sides of your body, especially the non-dominant one. If you notice an extreme imbalance, start using your non-dominant side even more than the other by either doing a few more reps on that side, or trying to use it more often during training.

Hamstrings can be a footballers greatest strength but also their biggest weakness. From cramps to muscle tears, there seems to be a lot of confusion as to why hamstring injuries are so common in footballers. One reason could be that football player’s hamstrings are not flexible enough to withstand the stretches and movements that a game of football demands. This is why stretching and mobility is so important. It’s essential for health and injury prevention and should be included in every warmup and cooldown routine. When the body begins to move, blood starts to circulate through the body more quickly. This warms the muscles and increases their elasticity. When the body is not given proper time to adjust to certain movements, it will be forced to stretch or flex in a way that could end up potentially causing injuries. 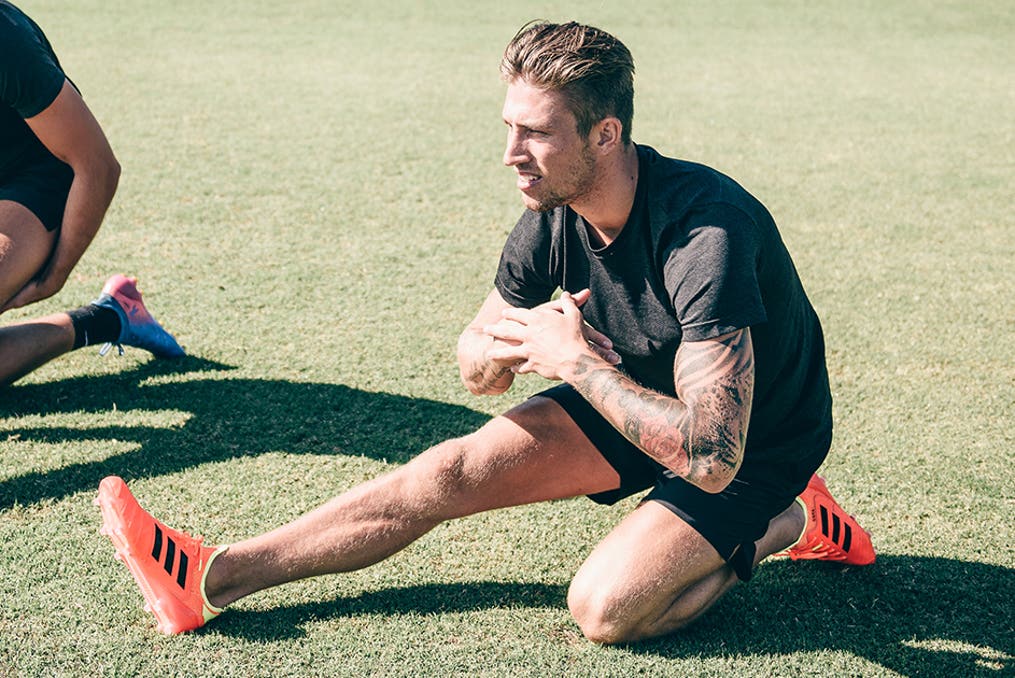 Quadriceps, the large muscles on the front of the thighs, are responsible for extending the leg (shooting and passing the ball). An average person’s quadriceps are already slightly stronger than their hamstrings, but in a football player, the difference in muscle strength is greater because the quads are used more. If there is a major imbalance this can result in injury and pain for the player. The best way to avoid this is to make sure that you are training your entire leg. This means doing similar amounts of workouts that focus on each muscle group. An example of this would be: squats for glutes and quads, hip raises for hamstrings, and calf raises for calves. By following your training plan with the Freeletics Training Coach, you can guarantee that each muscle group in the leg is being worked effectively, specifically and also simultaneously.

Anterior pelvic tilt means that your hips are tilted forwards. This is problematic because it puts more strain on the hamstrings and creates a hyperextended reverse C shape in the lower back, which can result in pains and injuries later on. Think of the hips as a full cup of water that you don't want to spill. When the hips are neutral they are healthy, and the glass is standing up straight. If you have an anterior pelvic tilt, the glass would be tilted forwards, causing the water to spill. The angle of the hips is determined by the four muscles that are connected to it: both hip flexors in the front and both glutes in the back. Anterior pelvic tilt is caused by having tight hip flexors and weak glutes, therefore pulling the hips into a forward tilt. 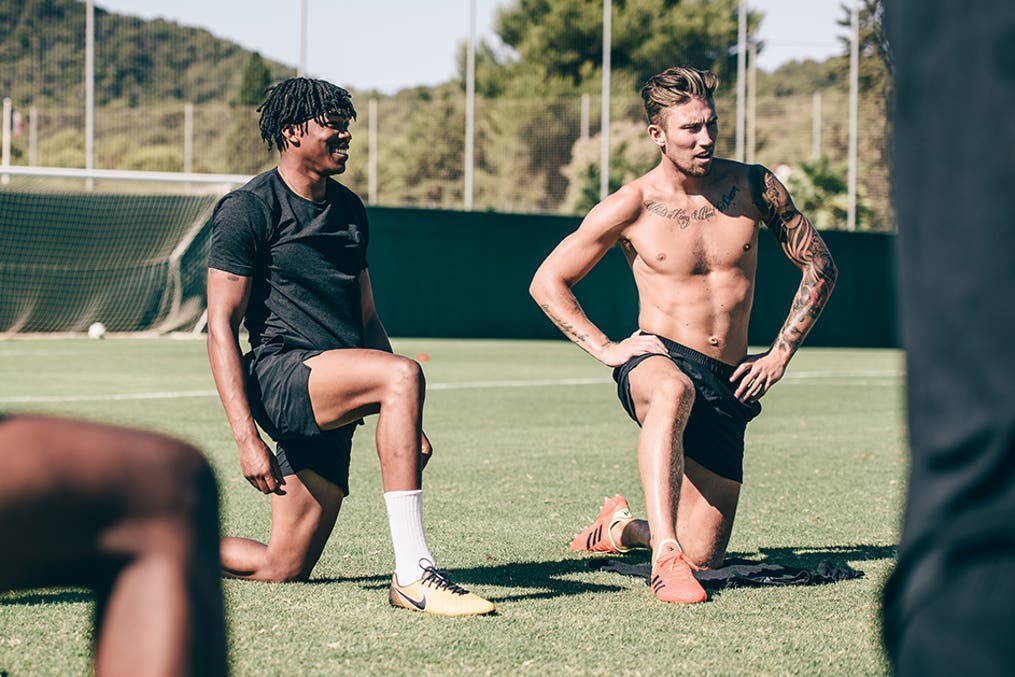 Anterior pelvic tilt can be reduced by strengthening the glutes and stretching out the hip flexors. To strengthen glutes focus on exercises such as shoulder bridge leg raises and single hip leg raises. These movements are better than most glute exercises for helping to fix anterior pelvic tilt because they also slightly stretch the hip flexor. In order to stretch the hip flexors, make sure you do both left and right hip stretches, which are found in the cooldown of your Freeletics workouts.

It’s not uncommon for football players to suffer from knee injuries, such as ACL and MCL tears, at the end of a season. Although these injuries can not be avoided altogether since they often happen when two players collide, preventative measures can be taken to make player’s frequent direction changes easier on their knees. When the ankle is immobile, or less mobile, the knee is forced to take on the rotation and flexion (bending of at a joint) that the ankle can’t handle during the turn. Therefore, when a football player’s ankle is stiff, knee injuries are much more likely to happen. Make your ankles more mobile by warming them up before sport. This can be done by making circles with your feet. Another fun thing you can try is standing on one foot and writing the alphabet in the air with the other. This increases coordination and mobility simultaneously. When stretching, it is also a good idea to take a minute or two to focus on warming up and stretching the ankles. 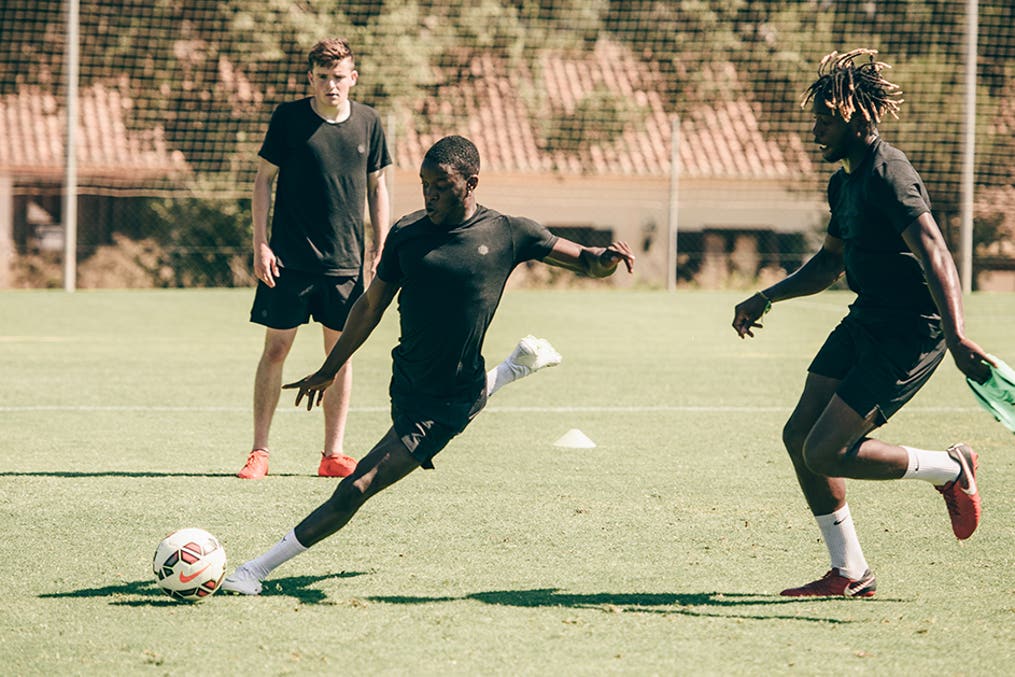