Freeletics: Getting you Football Fit

A breakdown of the main skills required by a world class footballer.
Ely4 years ago5 min read

Tens of thousands of eyes watch them. They’ve got both the grass and the world at their feet, spotlight in their face and screaming fans in their ears. If you’ve ever watched these guys at work, you’ll know how powerful, fast and explosively world class footballers move. How do they train in order to make it to this level? It’s actually not that different to your training as a Free Athlete. Let’s break it down so you can find out more. 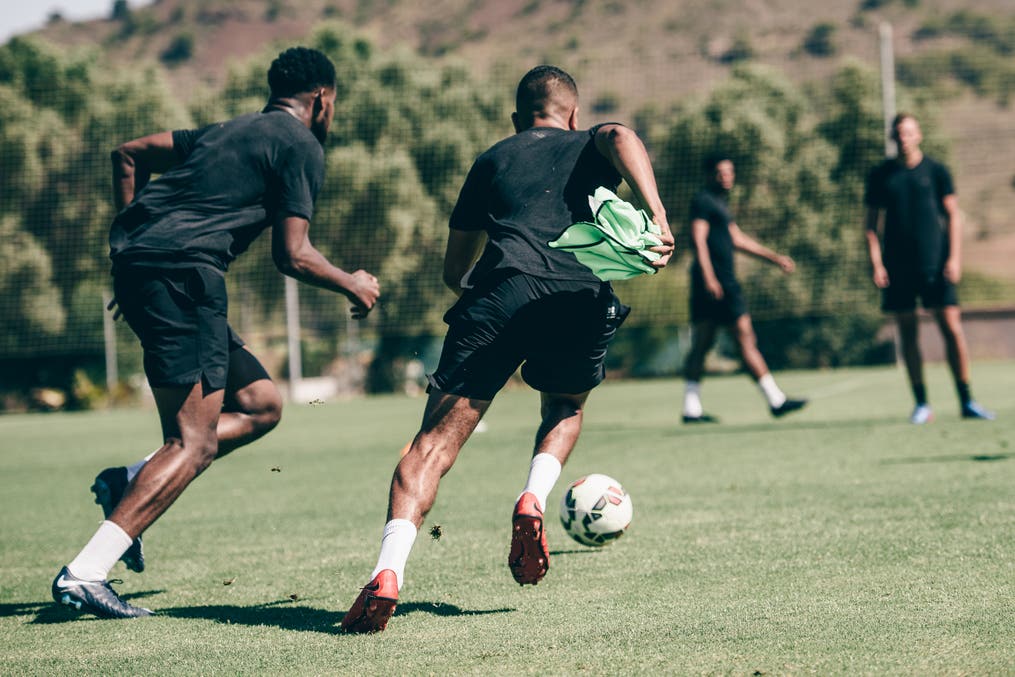 Breaking down a sport

Thoughtful training is effective training. What we are about to do with football is something we encourage you to do with whatever sport or activity you would like to excel in: break it down.

Football, a game that involves skill, technique, power and speed, can be broken down into two main actions; attacking and defending. Attacking involves the skills of dribbling the ball, making off ball runs, passing, and shooting the ball. Defense involves marking players or zones, staying on the attacker, and reacting quickly to their movements. Of course there is a lot that goes into the training of a world-class football player - that’s why not everyone is a world class football player - but there are a few quick and dirty Freeletics training tips we can give you to up your football game and improve your skills. Here we go:

Dribbling is all about protecting the ball from the defender and moving past them when the opportunity arises. This is done through a combination of whole body movements to fake the defender out and a series of controlled touches on the ball to create space between you and the defender. Successful dribbling comes down to a number of key factors; balance for whole body control, acceleration for breaking away from defenders, and strength for being able to change direction quickly and absorb stress put on joints and muscles whilst changing direction, jumping, and landing. 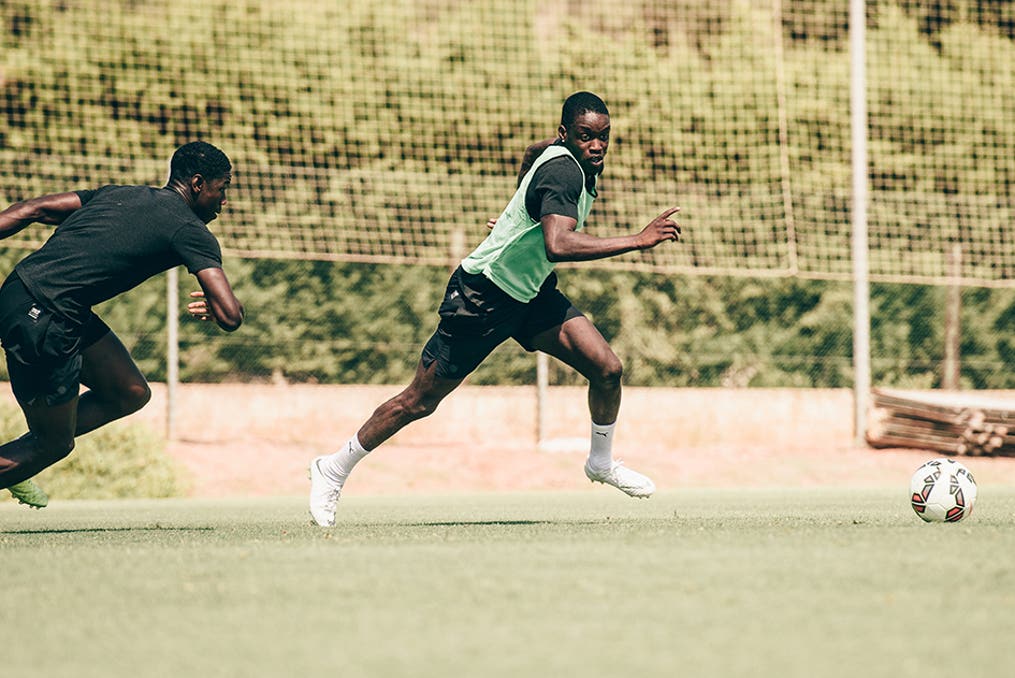 The best dribblers in football are able to give incredibly convincing body fakes, making their defender lose balance while they remain stable. This is done through quick and committed body movements, such as turning the hips and leaning in one direction, which are then reversed so that the player actually moves in the opposite direction than their opponent expects, leaving them with a clear path to drive the ball forwards. One way to train balance, speed and strength all together is through plyometrics.

After making a convincing move, the dribbler must create separation between themselves and the defender in order to give them time to either pass or shoot the ball. Separation must be created in the first second after a fake is made before the defender is able to regain balance. Again, plyometric and strength training are great ways to train explosive movements and fast acceleration. HIIT workouts can also be implemented to train your anaerobic glycolytic system which will help you gain the endurance levels required to last an entire football game and for fast sprints lasting over 10 seconds. 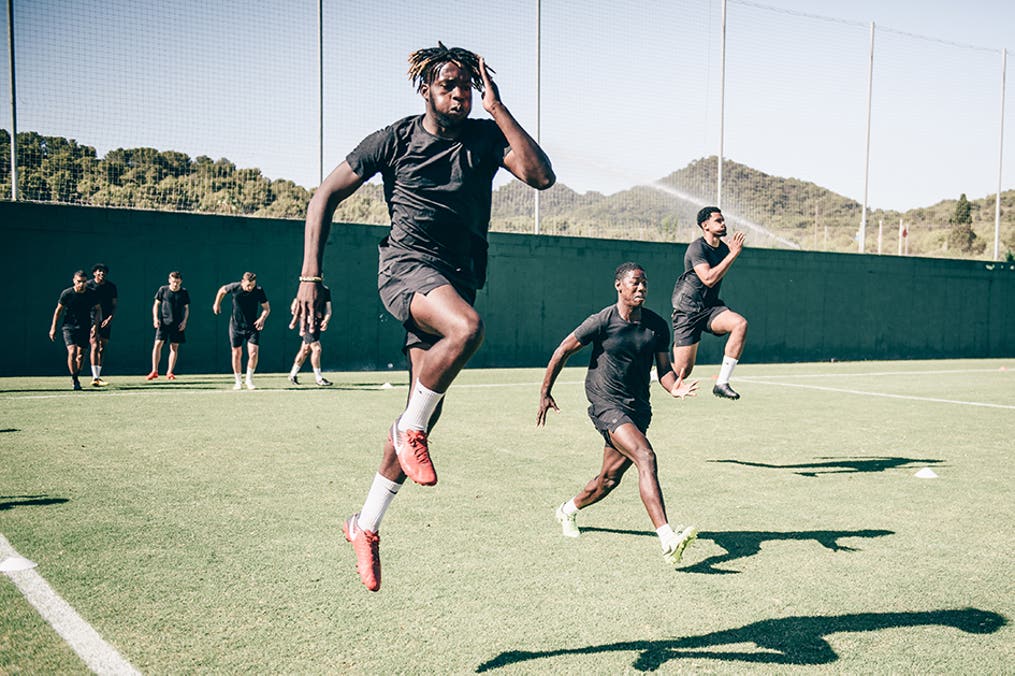 While changing direction and accelerating quickly, the body is put under substantial stress. Because of this, football players users strength training not just for speed and performance, but also as a form of injury prevention. A set of strong calves and tendons are essential for both directional change, because they support the knees and ankles, and explosiveness, as they are used for jumping, impact absorption, and initial acceleration. The ankles also need to be mobile. Footballers tend to suffer from stiff ankles, which creates more torque in the knees. The "joint-by-joint approach" (by Gray Cook) says that when the ankles are immobile, the knees react with instability to compensate for that deficiency. To prevent injuries in the knees, the ankles need to be mobile (especially in a movement pattern that is called Dorsiflexion). Make sure to warm your ankles up before playing, and take a few minutes to focus on them during stretching sessions. One good technique is to switch between standing on one foot when you’re brushing your teeth in the morning or do some of your bodyweight exercises barefoot.

Once a dribbler has created space between themselves and the defender, it’s time to shoot or pass the ball. For an efficient strike, a player’s body requires 3 things; flexibility to wind up and follow through to the ball, strength to increase power, and balance to remain stable and increase accuracy. 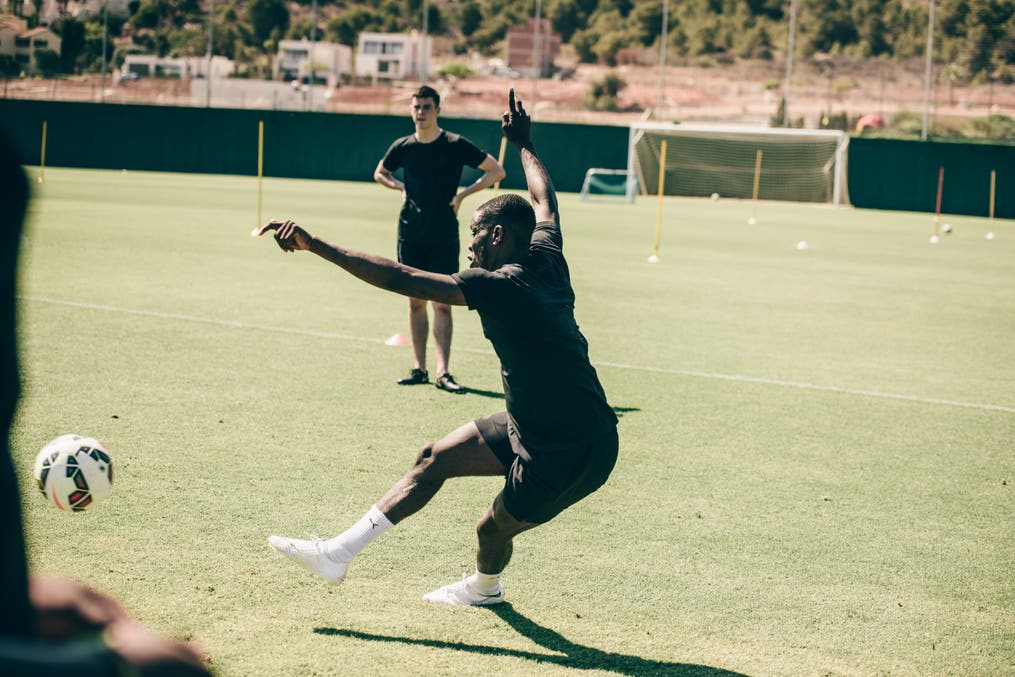 Hip mobility and flexibility as well as good rotation in the thoracic spine (very important but often overlooked for shooting and sprinting) allows a player to use the entire range of motion in their legs. This contributes to a more powerful and effective shot or pass, because the more you can wind up and follow through, the harder you can shoot. And that’s not all: footballers need flexibility, mobility and adequate range of motion not just for striking, but also to help prevent injuries. Why? Because it reduces overcompensation from other joints and tissues that get overworked when they have to compensate for a lack of mobility.

Shooting and passing are full body movements: the shooting leg swings while the upper body, core and planted leg stabilize. Although the full body should therefore be trained for best results, the most important muscles groups used in striking the ball are the lower body and core. Squats and squat variations as well as planking (bet you didn’t expect that one) are great exercises to train the muscles required for shooting. Since your upper body also often twists during a strike, rotational and anti-rotational (body/core resisting a twist) exercises are also key to strong and safe strikes on the ball. This can be trained through exercises such as Russian twists, just make sure to focus on good form in any rotational style workout. 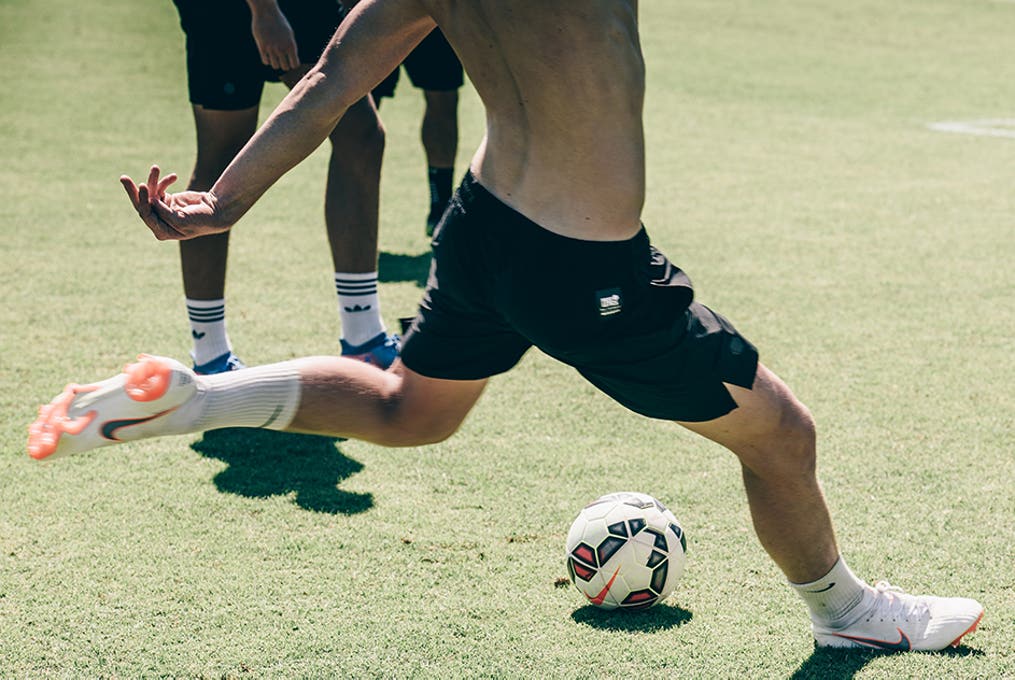 As we already mentioned, during a shoot or a pass, the foot planted on the ground is also put to work keeping the body stable. That’s why it’s important to train this “passive” leg just as much as the striking one. Although the best way to do this is simply by going outside and shooting the ball, pistol squats are also a great exercise to train single leg stability and strength. And that’s not the only one: Single-leg exercises are key for football players and they can definitely benefit from split lunges, lunges and cossack squats - all available in your Freeletics Bodyweight app.

On the other side of the ball, defending combines all of the skills necessary for offense. A defender needs to turn, balance, and accelerate as well as always be prepared to dribble the ball incase they manage to steal it. In addition to the skills required in offense, a defender also needs lightening fast reaction times in order to stick with the dribbler, as well as a lot of core strength to keep their balance during movements where they have to change direction fast. Every split second that a defender takes to adjust to the movements of an attacker gives the attacker a chance to get more space to advance with the ball. 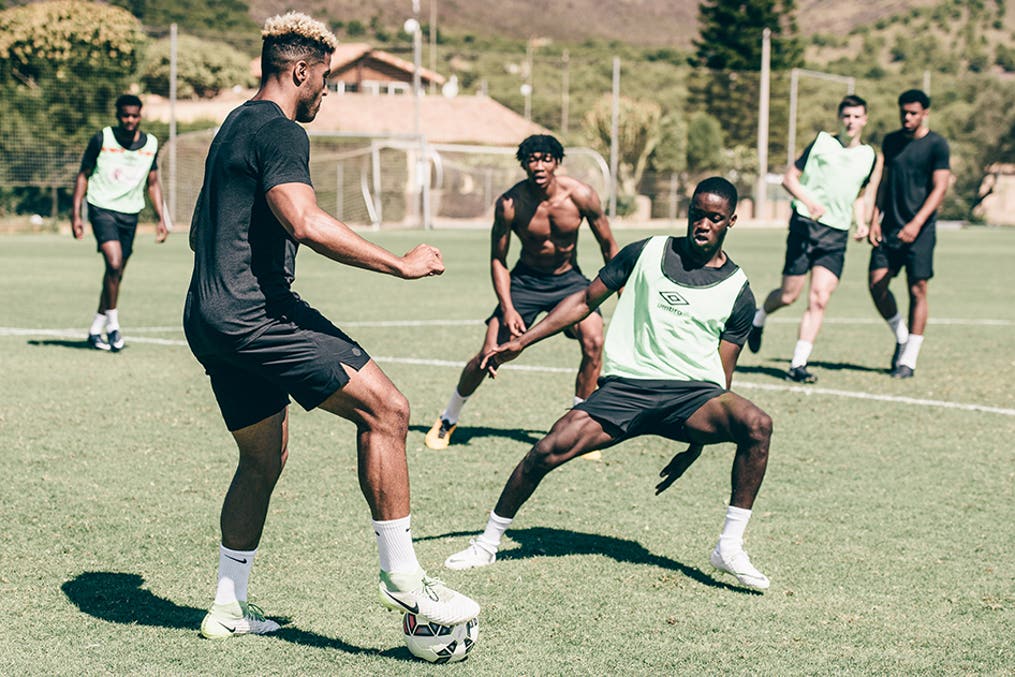 A defender must be able to move in every direction in order to adjust to wherever the attacker moves. To move safely, efficiently, and remain stable, a defender must train their legs and core, as well as their balance and explosiveness through plyometric exercises, just like attackers.