Are you caffeinating your workouts?

What exactly is caffeine? How does it work in the body? How does it affect training? And are there any side effects?
Robertlast year5 min read

Early morning, the alarm clock rings. You sleepily rub the sand from your eyes and start mentally preparing for a Freeletics workout. But before you do anything…a cup of coffee.

Can’t do anything without your morning cup? You’re not alone. Some people call it “procaffeinating,” as in “procrastinating” with “caffeine.” But why do so many people struggle to start their days without a caffeine hit? Why does this drink make us feel so alive? And, as an athlete, is there something to our caffeine habits?

Caffeine is a natural stimulant most commonly found in plants. It shows up in the cocoa beans we turn into chocolate, the leaves we steep into tea, and of course, the beans we brew into coffee.

Plants produce caffeine as a toxic substance. It’s meant to keep away any animals that might eat them. Fortunately for humans, what’s toxic to a bug produces some stimulating – and, many would argue, pleasant – effects.

Coffee on the brain

Coffee’s energy boost is mostly due to one neurotransmitter in the brain: adenosine. Neurotransmitters do what the name implies: They transmit information within the brain by activating special receptors humans evolved to receive those particular signals.

Adenosine’s job is to let your body know you’re tired. As you go through your day, adenosine levels rise in the brain. Then those adenosine molecules hook up with the receptors ready to receive it, and suddenly you’re yawning, and ready for bed. Or at least a nap.

Sounds logical, right? Sure. But caffeine disrupts that logic. Caffeine molecules antagonize adenosine receptors. Those molecules will actually “sit” on receptors in your brain and block adenosine.

Attention athletes: What’s in it for you?

Within this science, there’s something for athletes. Indeed, scientific research supports the idea that caffeine can affect athletic performance. Basically, since the feeling of tiredness is blocked, athletes are able to train longer and harder.

Let’s be clear here: The effects are modest! Caffeine isn’t going to completely change your training (in fact, some people respond less well than others). But it can offer a boost. Evidence suggests it can improve performance both during aerobic (cardio) and anaerobic (think weightlifting) activities. 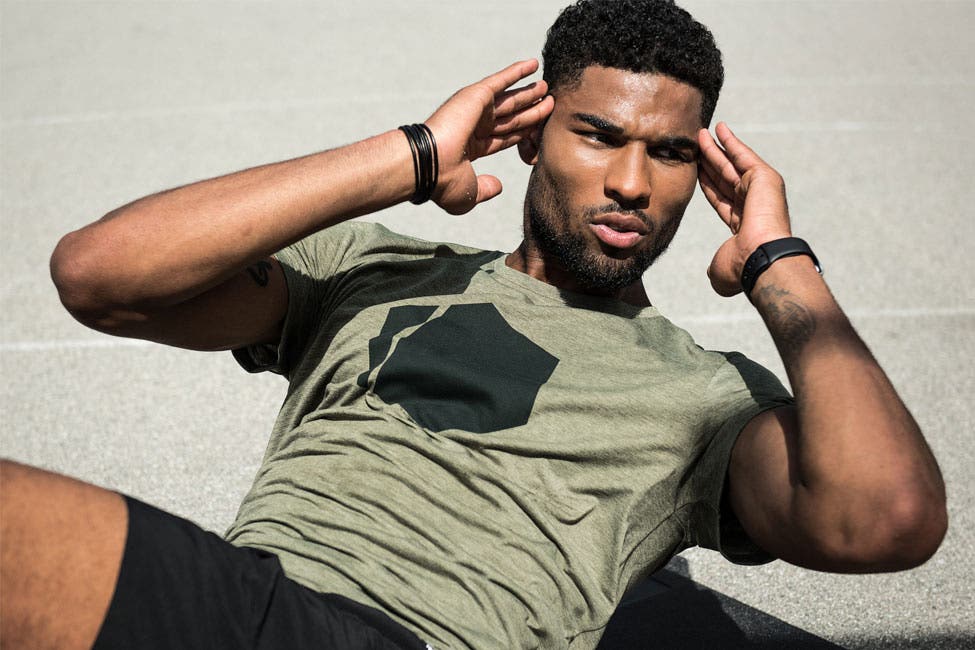 How much caffeine do I need to consume to see performance improvements?

What does that work out to? Well, consider a person who weighs 70 kg (155 lbs). That person would see performance boosting effects with about 140-210 mg of caffeine. Now since the average cup of brewed coffee contains 100-200 mg of caffeine, that’s only 1-2 cups of coffee!

You absolutely don’t need to consume abnormal amounts of caffeine for performance. 1-2 cups of coffee is a typical morning, not an extreme athletic ritual! And, just like in normal life, too much caffeine can make you jittery and anxious during training, and that’s no fun.

The International Society of Sports Nutrition notes that above 9 mg per kilogram of bodyweight, a person – even an athlete – starts to see adverse effects of caffeine. Thinking again of our 70 kg person, that means this negative threshold starts at 630 mg of caffeine – just 6 cups of brewed coffee.

How long does caffeine take to kick in?

From the moment you consume that caffeinated beverage, it takes around 20 minutes for the first effects to hit. And how long does it last?

You are likely to experience a spike in energy for around one to two hours since caffeine is directly absorbed into the bloodstream. Practically, that means that if you want to consume caffeine for performance, you should do it 60 minutes before exercise. Indeed, this one-hour recommendation is the most common.

So what should I keep in mind?

No one who’s had too much caffeine needs much of a warning. And all the standard advice about caffeine applies here: Don’t drink it more than 8 hours before sleep, don’t consume too much.

As always, overcaffeinating can cause jitters and anxiety, and taking in caffeine too late can lead to sleeplessness. But can it do even more harm?

Your body can build up a tolerance. And withdrawal symptoms are possible. Those headaches you might feel when you don’t have your usual four cups of coffee a day are real. The important point here isn’t to scare you off caffeine. It’s to help you realize that fatigue, headaches, or nausea can result from caffeine dependence. If you start feeling adverse effects, just dial it back a bit.

One of the biggest long-term health risks from caffeine isn’t, in fact, the caffeine itself. It’s what comes with caffeine. Whether it’s milk in coffee, or sugar in energy drinks, we often add things to our caffeine.

Those things contain calories, and in the case of sugar, calories without much nutrition. Over time, the extra calories we consume when drinking caffeine can lead to unwanted weight gain or the poor health associated with too much sugar.

So do yourself a favor: Stick to all-natural drinks like coffee, tea, or matcha instead of energy drinks or sodas. And when you do drink caffeine, consider sugar, milk, or other calories a treat, not the norm.

Get started with Freeletics